How to Create and Manage Domains

A Ortelius Domain is how Ortelius organizes and shares data across teams. You publish your microservices to a Catalog Domain, you package your Application in a Project Domain and you track your continuous delivery pipeline with a Life Cycle Domain. All Ortelius objects are assigned to a Domain.

Domains and your Domain Driven Design

Domains catalog and publish microservices and other reusable objects (web components, DB updates, etc.) making it easier to share these microservices and Components across siloed teams. Domains can be structured to closely resemble the patterns of your organization. They can represent functional areas such as ‘security services’ or departments, teams, geographical locations and software projects.

Everyone has a single high-level “Global” Domain. All other Domains are Subdomains. For SaaS Users, your sign-up form asked you for a “Company” and “Project.” These values were used to create your initial Domains. If you are using a locally installed version (on-prem), your highest level Domain will be “Global” and you will need to create your own Domains.

A Subdomain inherits all the access properties from its parent Domain. This inheritance continues down through all Subdomains.

There are four common ways to implement Domains: 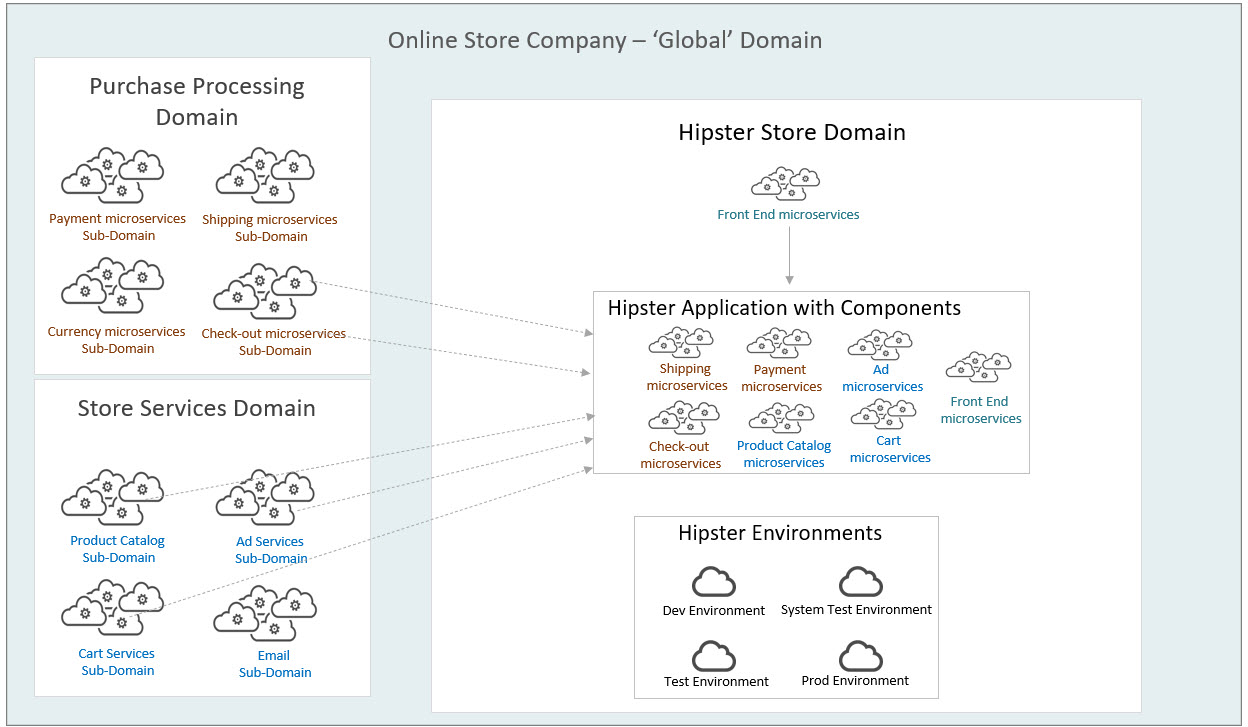 A full view of all Domains is based upon your User privileges. The view is displayed in a “Sunburst” map, starting at the highest level Domain with the ability to drive down into the Subdomains, and Subdomains after that. Clicking on a segment in the Sunburst map will take you to that Domain. Clicking on the center of the Sunburst will take you back up the Domain structure.

When scrolling up or down the Domain hierarchy using the Sunburst map, the detail information is re-displayed according to where you are in the map. Below are the details for a Domain.

Users within designated Groups can update the Domain in various ways. To add a Group to one of the access lists, drag and drop the Group from the Available Groups list onto the desired access list. All Users who belong to a Group in one of the Access lists will be granted access to the Domain. Access control for Domains include:

Task are used for executing deployments, managing approvals, or staging a deployment. Tasks can be assigned to any Domain. However, they are most commonly associated to Project Domains and Life Cycle Domains. You can assign a Task at a higher Domain level allowing any child Domains to automatically inherit the Tasks. This inheritance simplifies managing Tasks by making some common to all of your Subdomains. However, this means that a Catalog Domain may include Tasks that it cannot use.

The following Tasks are available as default Tasks, but you can create any type of custom Task. A custom Task will call a Custom Action:

DeployHub Pro includes a “smart” Calendar. The following Task are used to interact with the Ortelius Smart Calendar for Requesting and Approving deployments.

You can add new Tasks from the Domain Dashboard by navigating to the Domain and interacting with the Tasks Section. Select the +Add option from the Tasks Section and a pop-up displays all available Tasks. Selecting a Task will add a new row into the table. Use the Task Detail Section to define the unique details of your new Task. You can update or remove a Task by using the Task Section table. Using the checkbox, select the item and use the the Delete or Edit options.

Once you create a Task, it is recommended that you rename that Task to more closely describe its use depending on the options selected.

Below is a description of all Tasks and their detailed information.

Move Version to the Next or Previous Pipeline State

Deploys an Application or Release version to an Environment. Select the target Environment via a drop-down list.

Manually Trigger Action to be executed

Runs a stand-alone Action. For example, if you need to interrupt a deployment process, this Task allows you to execute the steps manually. The manually triggered Action will be placed in the “To do” list of the User or Group that executed the Deploy Task.

Approve Version for Move to Next Pipeline State

Request Calendar Entry for Deployment to an Environment

DeployHub Pro feature. Sends a request from a User to add a time slot to the calendar for a deployment. The request is sent to Group who has the authority to manage a particular Enviornment’s Calendar. When the Request Task is defined it is linked to the task to be requested. When the Request Task is executed an entry is placed into the “To Do” list of all the Users who are members of the Group with the calendar access. The Request Task can have a Request Notification Template defined which can send out a notification to the appropriate Groups.

Once a Task is defined, it must be granted execute access to a Group before it can be invoked. Select the Task using the check box. Drag the desired Group from the Available Groups column to the Group Access area. Users of the Group can then execute the specified task.

Groups are assigned authority on a Task by Task basis. It is possible for a Domain to have two different Tasks with the same function, one of which allows a particular Group to run the Task, and the other which doesn’t. This allows similar Tasks to be created. They can have different characteristics assigned to them such as Pre-Actions and/or Post-Actions, Notification Templates, etc. Also different User Groups can have the authority to run them.